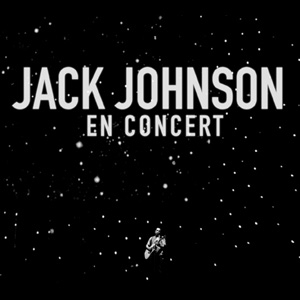 100% of the 2008 tour profits and profits from this release will be going to fund the Kokua Hawaii Foundation and the Johnson Ohana Charitable Foundation to support environmental, art, and music education around the world.

In the summer of 2008 Jack Johnson took a trip through Europe playing everywhere from historical venues to classic outdoor stages making it the biggest tour of his career. The film is a collection of live performances with Jack’s quartet along with special appearances by G. Love, Ben Harper, Mason Jennings, Neil Halstead and Matt Costa. Through weathering the stormy nights in Newquay to surfing on a river in Germany, to playing the packed house in London’s Hyde Park, the film takes you on a trip and captures the connection between an audience and an artist on an international stage.

The 2008 world tour had a ton of special moments, and this CD represents some of the finest. From sharing the stage at Bonnaroo with Eddie Vedder, to leading a massive singalong at Bercy in Paris, to wowing a festival crowd at Outside Lands, to stepping onto the stage alone to close the show at Red Rocks. Longtime crowd favorites from Jack’s catalog are inter- woven with passages from some of Jack’s own favorite songs (Do You Remember segues into a verse from Jimi Hendrix’s “Remember”; Jack’s “The Horizon Has Been Defeated” blends into Paul Simon’s “Mother and Child Reunion” in front of a mainstage headlining crowd at Bonnaroo, and “Bubble Toes” dips into the Charles Wright classic “Express Yourself”).