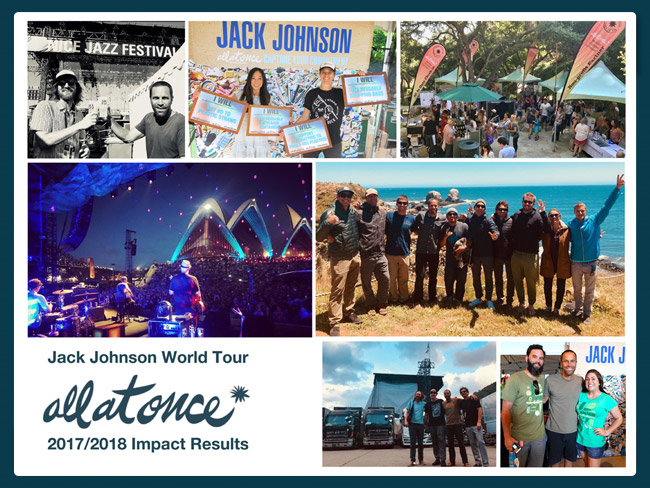 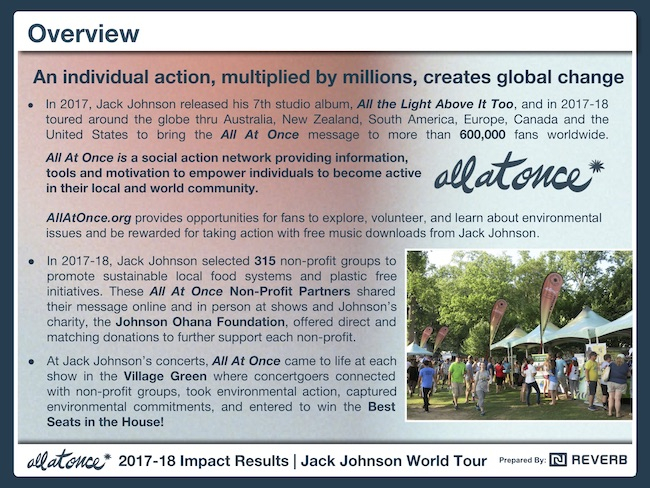 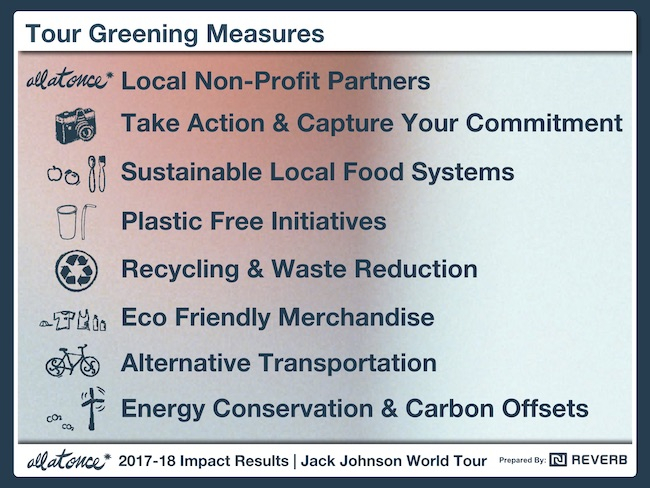 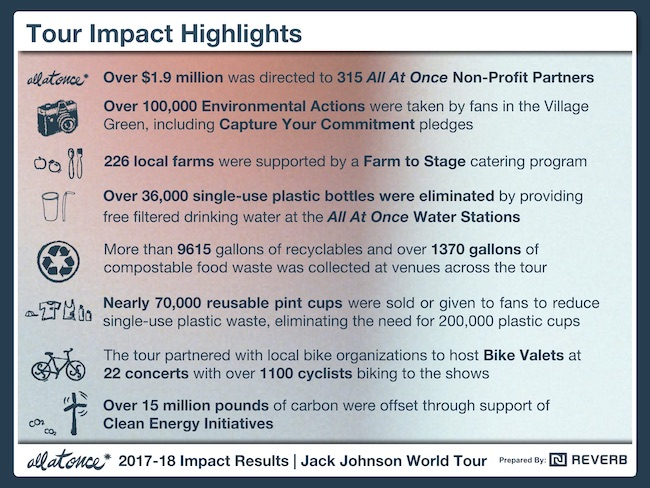 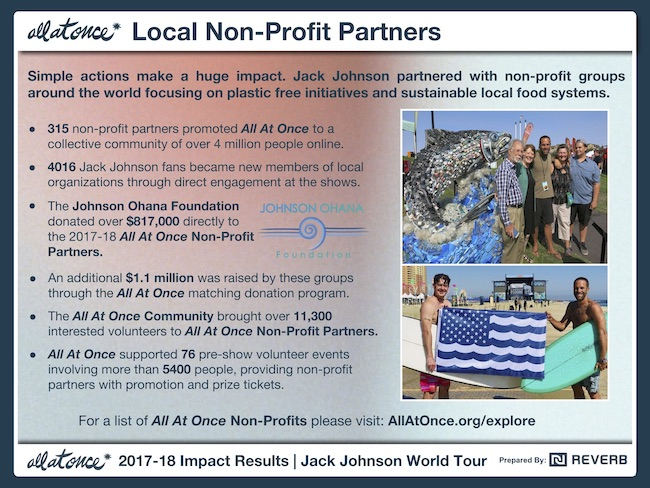 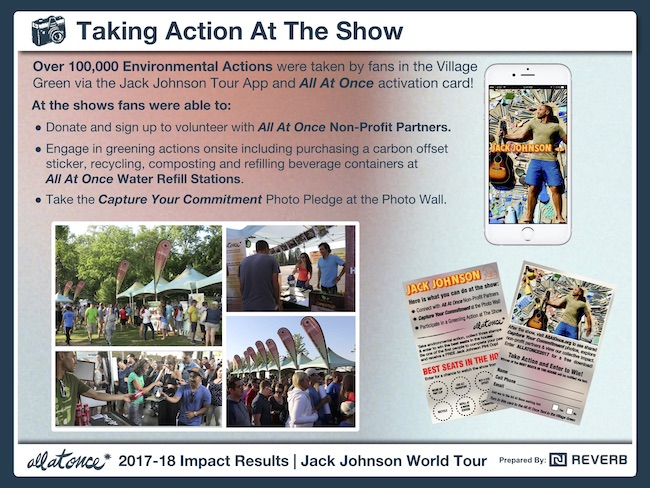 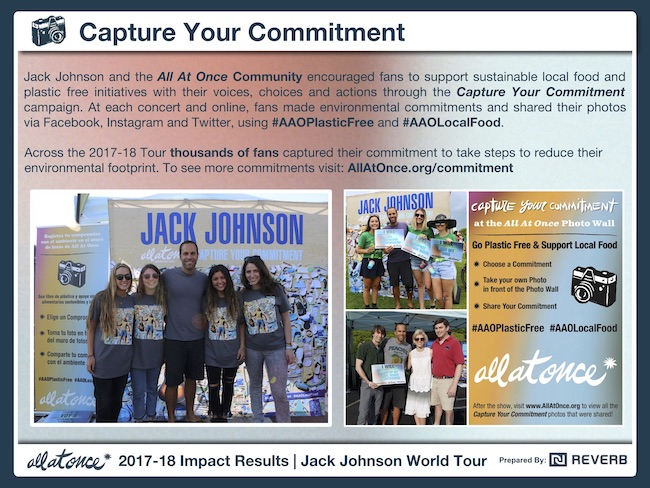 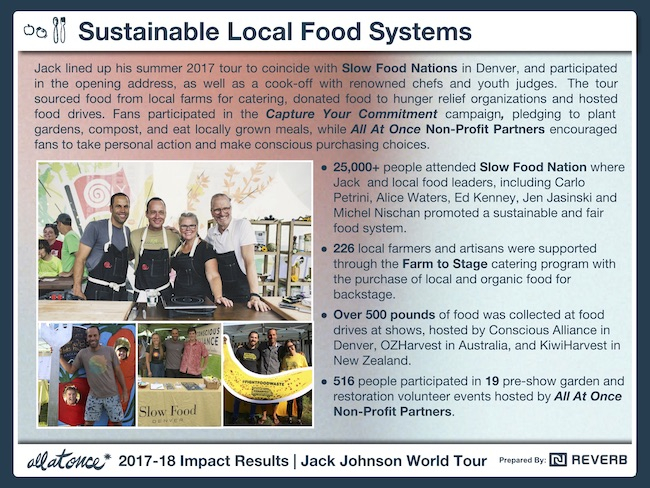 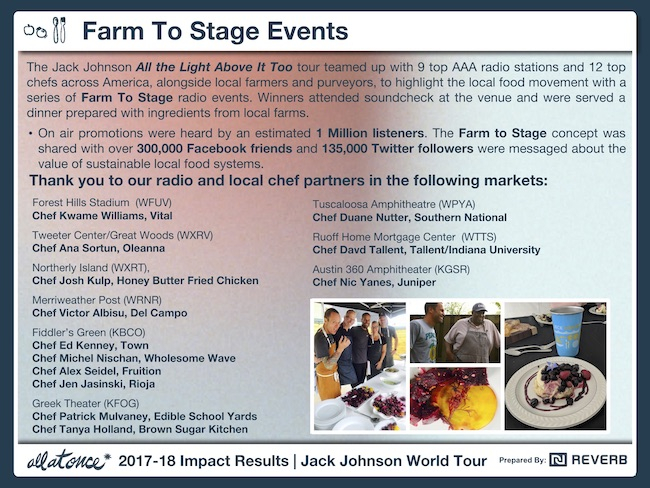 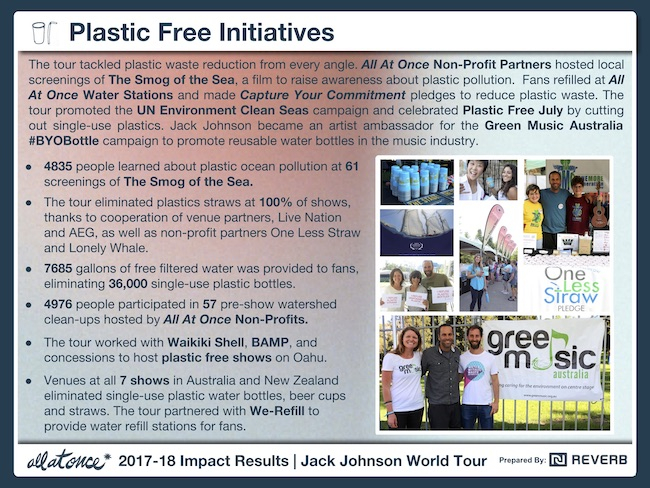 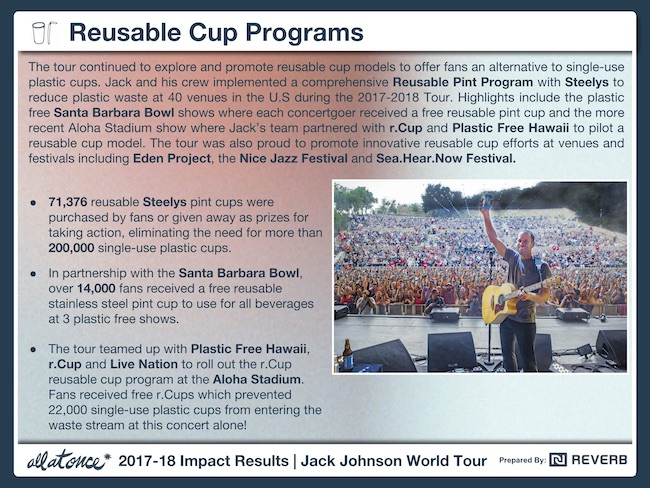 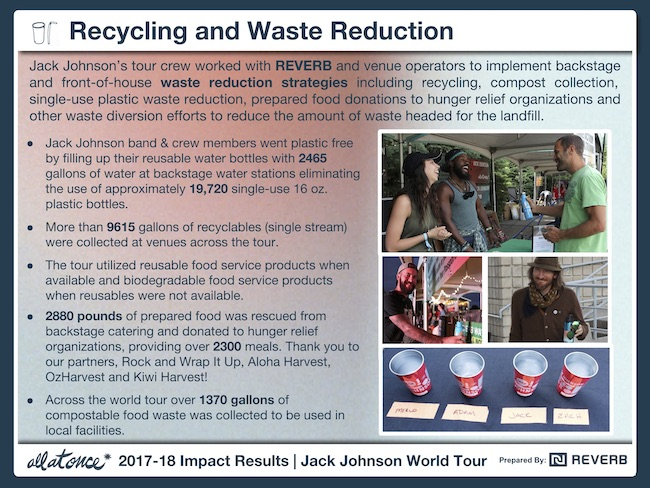 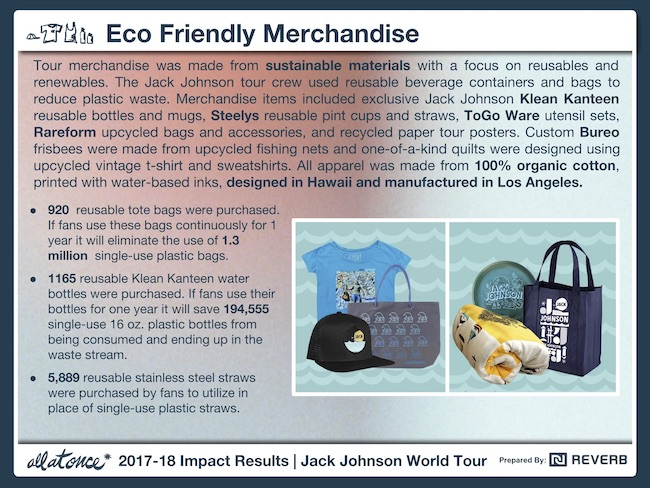 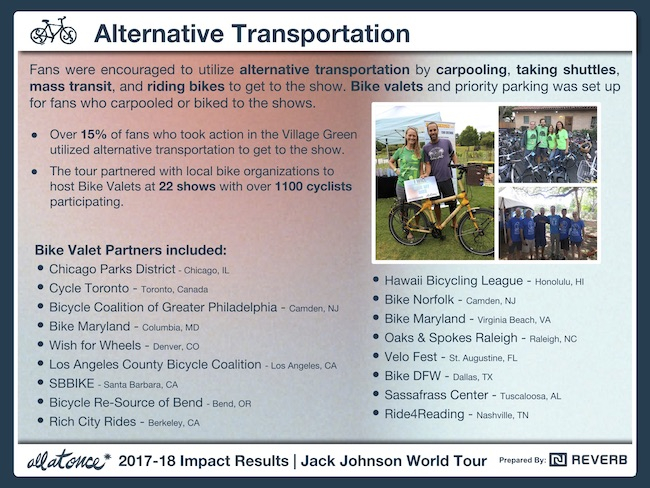 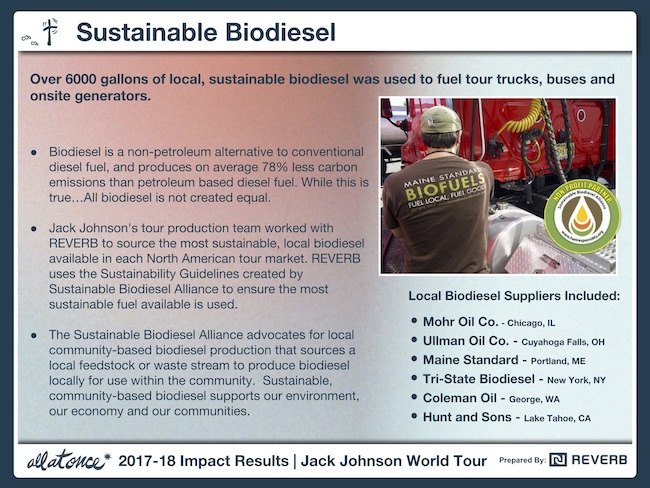 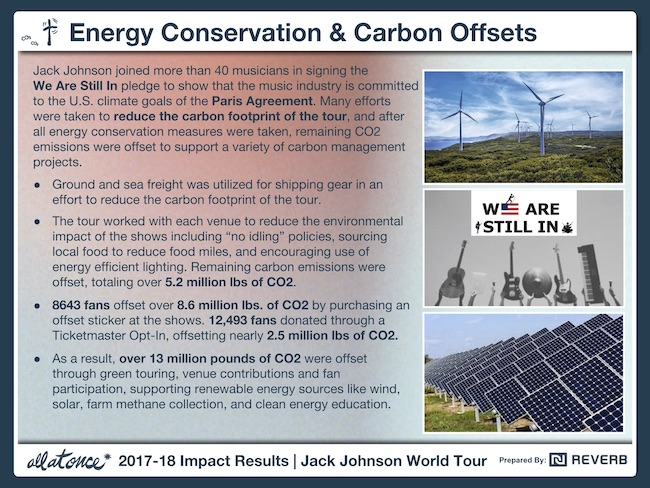 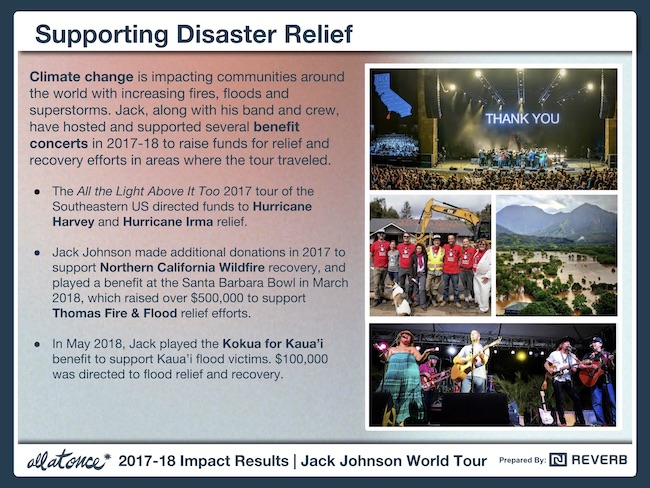 Jack Johnson and his crew are taking actions to minimize the environmental impact of their tour. Learn more about the tour's greening measures and what you can do to be a part of the action.

All At Once Non-Profit Partners

Jack Johnson and his All At Once campaign are collaborating with hand chosen community groups to support sustainable local food systems and plastic free initiatives.

You can engage with All At Once non-profit partners doing good work in your community at the show or online. Learn more at www.allatonce.org.

As part of Jack Johnson's 2017 Summer Tour, the Johnson Ohana Foundation is offering direct and matching donations to All At Once Non-Profit Partners.

You can support All At Once Non-Profit partners by volunteering, becoming a member, or making a donation.

The All At Once campaign supports non-profits and engages fans in the realms of sustainable local food systems and plastic free initiatives.

You can make a personal commitment to reduce your plastic waste and support locally grown food. Capture Your Commitment at the All At Once Photo Wall at a show or online at AllAtOnce.org.

Jack Johnson and his crew are eliminating the use of single-use plastic water bottles on tour by filling up at backstage water refill stations.

You can fill up their own reusable water bottles for free at the All At Once Water Stations at all venues. Jack Johnson reusable bottles, mugs and pint cups will also be available for purchase at the shows.

Jack Johnson and his tour crew work with venues to offer fans an alternative to disposable plastic cups by promoting a Reusable Pint Program.

You can purchase a reusable pint at the show and use it each time you buy a beverage to help reduce single-use plastic waste.

Jack Johnson and his tour crew work with venues to eliminate plastics straws. Venues are encouraged to offer “straws by request” and to provide an alternative to plastic straws.

You can reduce your plastic waste by taking the #1LessStraw pledge. Say no to plastic straws or choose an alternative such as stainless steel, glass, paper, or bamboo.

Jack Johnson and his tour crew work with venue operators to make every effort towards a zero waste tour through recycling, composting, and other waste diversion efforts to reduce the amount of waste headed for the landfill.

You can support this initiative by participating in recycling and composting on site. Look for the All At Once recycling signage at the venue.

Sustainable biodiesel will be used to fuel tour trucks, buses and generators throughout North America. Ground and sea freight will be used for shipping gear in an effort to further reduce the tour’s carbon footprint.

You can save gas, money and reduce your carbon footprint by carpooling, utilizing shuttles, mass transit, and by riding bikes to get to the show. Link up with friends or find an efficient way to commute via Zimride or UberPOOL.

You can check out eatwellguide.org to find fresh, local and sustainable food options at restaurants, farmer’s markets, CSA’s and stores in your area. Reduce your food waste and start composting your food scraps using tips from Sustainable America.

Tour merchandise is made from sustainable materials with a focus on reusables and renewables. Jack Johnson tour crew use reusable beverage containers and bags to reduce plastic waste.

After all energy conservation measures have been taken, remaining CO2 emissions for each show and the entire tour will be offset to support a variety of local and sustainable carbon management projects.

You can offset your travel to and from the show by opting in to the carbon offset ticket add-on when purchasing your concert tickets online or buying a carbon offset sticker at the show.

Impact will be tracked throughout the tour to demonstrate how collective action can result in significant change.

The Ecosurf Institute is a Brazilian organization that brings people together to work for healthy oceans and marine areas, and promotes environmental education, volunteer efforts, innovation and advocacy. Learn more at ecosurf.org.br

Brushfire is headquartered in a newly-renovated green building, leveraging a number of innovative features to keep their environmental impact low. These features include:

Special thanks to our Greening Partners and  1% for the Planet Business Partners who contributed to our recent  From Here To Now To You Tour:

Reverb is a 501(c)(3) non-profit engaging musicians and their fans to take action toward a more sustainable future. Reverb coordinated biodiesel fuelings, farm to stage catering, outreach signage, carbon offsets, and All At Once volunteers on Jack's recent tour. Learn more about our tour greening initiatives on Jack's recent tour by downloading the 2014 Impact Report here.

Klean Kanteen is a certified B Corporation and 1% for the Planet business member deeply committed to reducing single-use disposable plastics. Klean Kanteen donated reusable co-branded pint and water bottles to our tour crew and volunteers and provided All At Once Water Refill Stations for fans to support the tour's plastic free initiatives. Learn more about being plastic free at  allatonce.org/plastic-free

Patagonia Provisions is a 1% for the Planet business member that offers a growing selection of foods that address environmental issues and support local food producers. Jack is a new ambassador for Patagonia Provisions and recently promoted a locally grown cooking series where participants were entered to win tickets to Jack's west coast tour and Farm to Stage promo events. Learn more about supporting sustainable food systems at allatonce.org/local-food

Thank you to the following businesses who donated products for our VIP and backstage areas during the 2014 Tour: Kona Brewing Company, Juice Ranch - Santa Barbara, McConnells Ice Cream, Brown-Forman and Salazon Chocolate. 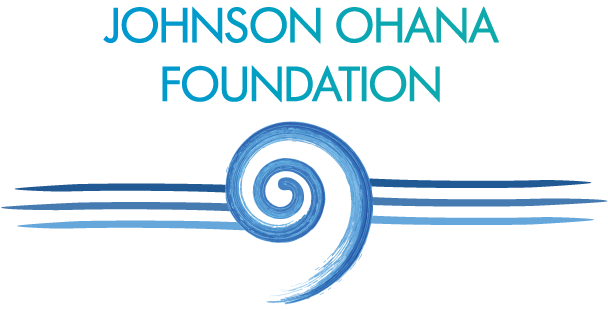 100% of Jack Johnson’s 2008 tour profits were used to establish the Johnson Ohana Foundation a non-profit charity founded by Kim and Jack Johnson to support environmental, art, and music education. Since 2008 as part of the All At Once campaign, Jack Johnson’s tours have collaborated with over 400 community groups worldwide focusing on plastic free initiatives, sustainable local food systems, and other hands-on environmental projects. The Johnson Ohana Foundation provides direct and matching donations to support these partners and has donated over $4 million since 2008. You can support All At Once non-profits in your community by making a donation, becoming a member or signing up to volunteer. To learn more visit All At Once. 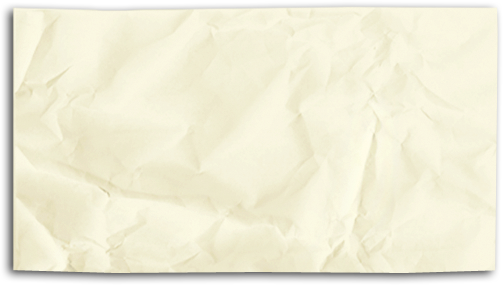