Jack and his band, Adam Topol, Merlo Podlewski, and Zach Gill, have been putting countless hours in at the Mango Tree Studio to record their 6th studio album. The album, currently untitled, is being recorded on 100% solar energy in Hawaii and will be released worldwide the week of June 1st on Johnson's own Brushfire Records label. Stay tuned, we'll have more news for you on the album front in March and a new single out in April. Following the June 1st release of his new album, Johnson will embark on his first world tour since 2008, kicking off in Europe on June 16th. The tour will be a mix of headline shows London, Paris, Berlin, and Amsterdam and festivals including Glastonbury (UK), and Roskilde (Denmark). Stay posted, the US Tour dates will be announced in March. 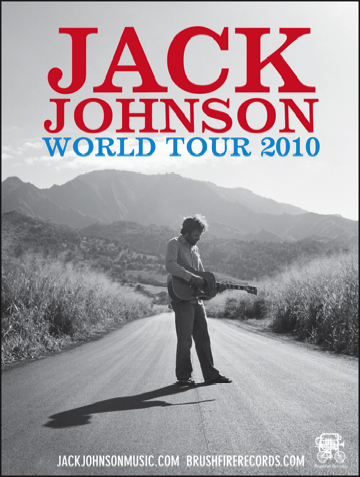 2018
December
Thanks for a Great & Green Tour!
​ All At Once Sustainability Awards Announced
Catch the Plastic Free Wave
Jack and the Aloha Stadium go Plastic Free!
“(Sittin’ On) The Dock of the Bay” 50th Anniversary
Happy Holidays!
Jack and Eagles at Aloha Stadium goes Plastic Free!
Plastic Free Pipeline…Catch the #PlasticFreeWave!
Reusable Pints a Success on Tour!
Jack Johnson Music Holiday Sale
November
Jack Johnson Music Holiday Sale
Get Out and Vote America - Today is Election Day!
United States and Oceans of America
Eagles Show Reminder
Jack to Headline 30th Anniversary of Byron Bay Bluesfest in 2019
October
Sea Hear Now
John Craigie’s “I Wrote Mr Tambourine Man”
Jack to open for the Eagles in Hawaii!
Jack joins “We Are Still In” for Climate Action
Celebrate Farm to School Month this October!
Millions Took Action on World Cleanup Day!
Jack to Headline 30th Anniversary of Byron Bay Bluesfest in 2019
September
Jack will be the Special Guest for the Eagles!
August
All The Light Above It Too Tour Concludes in Europe & Japan