Reaping What We Sow

Article from The Current by Shelly Leachman 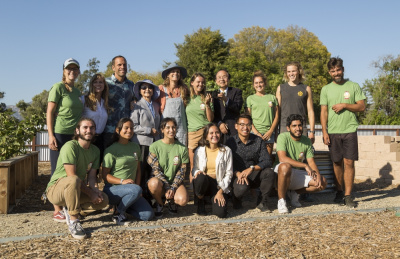 From the seed of an idea, to seeds in the ground and now, to an actual harvest.

Seven months after the first garden beds were built and planted, the Edible Campus Student Farm at UC Santa Barbara is officially open, growing and providing fresh local produce for students. This milestone for the university’s efforts in sustainability and food security was marked by a ceremony featuring Chancellor Henry T. Yang and prominent alumni Kim and Jack Johnson, supporters of the project from the beginning.

“What’s so great about the student farm and what is growing here is what we’ve been doing in Hawaii: connecting kids to where their food comes from,” Kim Johnson said at the event. “UCSB was the place that we first connected to where our food comes from. That’s why we’re so excited about this student farm. It’s really amazing to see what it is now and what it will be in the future.”

An inaugural workday at the 12,000 square-foot parcel last spring saw construction of six garden beds and the installation of irrigation; nine more were erected over the summer, with more on the way. Plans call for 32 raised beds altogether, plus a greenhouse, which is forthcoming later this fall.

All the planting to date — a mix of seasonable vegetables — has been done using compost and soil amendments direct from the Department of Public Worms (DPW), a composting collective run by Associated Students, which oversees daily operations of the new farm.

“It’s been so much fun to watch this farm develop and slowly come together,” Jack Johnson agreed. “It’s fun for us to come here and work some days and to see it evolving. There are so many big concepts in life we can learn from a garden. For me it’s a place where I can say, a lot of my songs were written after a day of gardening and observing things and watching change.”

The Johnsons have been partners and mentors on Edible Campus, a multifaceted food sustainability initiative, since its inception and, through their Johnson Ohana Foundation, devoted donors to the project.

“The Edible Campus Student Farm will play a vital role in our campus sustainability practices and in our role to address the food security and basic needs of our community,” Chancellor Yang said in thanking the Johnsons. “We are working to ensure that our students have access to healthy, sustainable foods.”

Once all three Edible Campus installations — the orange trees, the tower garden and now, the farm — are in full production mode, UC Santa Barbara hopes to double, from 25,000 pounds to 50,000 pounds, the amount of fresh produce distributed annually by the A.S. Food Bank.